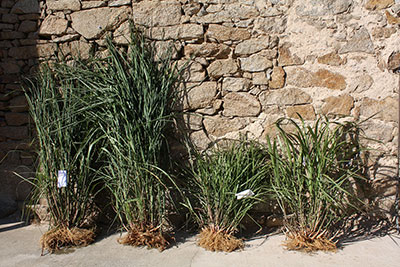 So far, only Miscanthus x Giganteus is considered to be an economically significant variety in Central Europe. It is a triploid species bastard with 57 chromosomes, which was created in the natural flora of Japan by a random crossing between the tetraploid Miscanthus sacchariflorus with 76 chromosomes and the diploid Miscanthus sinensis with 36 chromosomes. MxG does not form germinable seeds and is therefore non-invasive and can only be propagated vegetatively via plants or root sections.

Other known varieties are the protected varieties: Nagara, Amuri, Meidl, Goliat, etc. Despite some advantages, these have not yet established themselves on the market.

The latest plant breeding and crossbreeding, mostly undertaken by institutes or individual commercial suppliers, are mainly aimed at simplified cultivation or cheaper young plants, which is achieved by seeds (35-50% cost reduction). Likewise, a higher biomass yield or higher tolerances against drought or against contaminated soils are aspired.

Unfortunately, it is only slowly coming to the attention of researchers that, in addition to the yield per unit area, quality plays an important role in material utilization.

Miscanthus as a research object

Within the framework of the EU research project "GRACE" and also in the already completed research project "MISCOMAR" or in the currently newly starting "MISCOMAR+" project, the interrelationships between cultivation, varieties and use are specifically investigated on a pre-industrial scale.